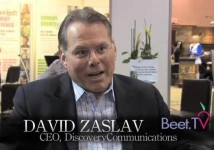 LAS VEGAS, NV–One of the first television networks to announce plans to launch a 3-D network, Discovery told Beet.TV the new network will likely launch later this year or early 2011.

The 3D network is a joint venture between Sony and IMAX, as Discovery CEO David Zaslav explained to me when I sat down with him following his keynote at the NATPE conference on Monday morning. He said much of the decision to launch the network came down to common sense.

“If people like to consume it in motion picture format and there is this push to put sets into the home and our content looks good in hi-def, then it should work in 3D,” he said during his keynote. Still, 3D is a risk since it’s still so new. “The way technology works is you have to place your bets beforehand.”

In the online video world, Discovery’s focus is on short clips, rather than long-form content, he said.

By Daisy Whitney on January 26, 2010 @daisywhitney