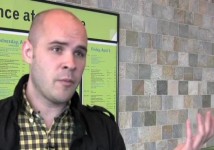 Robin Sloan, formerly a top online strategist at Current TV is headed to Twitter to manage media partnerships, he announced on his blog.

Last year in San Francisco, we spoke with Robin about his approach to API's, content syndication and the emerging state of digital journalism.  We are republishing the interview tonight.

More on his move by Kim-Mai Cutler at Venture Beat.