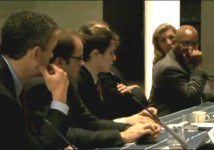 With a rich trove of demographic data and e-mail addresses, the Obama campaign leveraged the power of video by producing and distributing content to its targeted constituents.

At the Beet.TV Online Video Roundatable on December 1, 2010, former campaign video strategist and producer Max Harper explained how the Obama campaign used data to maximize results from its videos.