Sir Tim Berners-Lee: The Semantic Web Has Arrived and the Obama Administration is “Onboard” 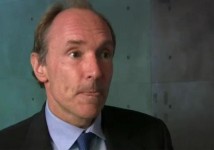 WASHINGTON, D.C. — Sir Tim Berners-Lee, the inventor of the World Wide Web, has been on a quest for several years for the adoption of something he has coined the semantic Web — a data-rich, interconnected Web.

He told me yesterday in Washington that this year his vision is taking form in ambitious programs with the Obama Administration, the data.gov initiative, and the government of British Prime Minister Gordon Brown, for whom he consults.

In the U.S., the move to put great amounts of raw data on the Web has been accelerated by the U.S. stimulus package, he told me.

Anil Dash wrote recently on the Huffington Post that the U.S. government is the "most interesting start-up" of the year.

Sir Tim was in Washington at a symposium about science and technology at the Embassy of Finland organized by Finland's Technology Academy Foundation.  The Helsinki-based foundation presents an achievement award every two years.  Sir Tim was the first recipient of the award in 2004.

He was interviewed on stage by Steve Lohr, technology correspondent for The New York Times.  A video stream of the two-hour event can be seen here.  The PBS transcript is here.

Update: Here's Steve Lohr's story this weekend about government getting data on the Web.

Sir Tim and his New Flip: He Shoots Me, I Shoot Him!

Couldn't help but notice Sir Tim with a Flip video camera as he was capturing the event.  I filmed him with my Canon digital camera as he filmed me.  You can find the brief scene at the end of this interview.

Sir Tim Berners-Lee:  Well the semantic web is about putting data on the web. Data on the web is maybe boring unless you're the sort of person who likes to get stuff into a spreadsheet and if you like working with spreadsheets, then typically you want data in a form that you can load into a spreadsheet. It's no good if someone gives you a printed document or even a webpage. You print the webpage off but you don't have to key it in all by hand. So we've got a move to put data on the web so people can actually process it and analyze it and there's a really big push right now in a lot of countries, the UK and the US very particularly, to put government data on the web.

So 2009 has been the year to push to get government data onto the web. It's been very exciting. The Bower Administration is totally on board, the data.gov, the British Prime Minister specially has given the go-ahead, put a team together. Lots of really exciting data sets accumulating day by day in those countries.

A lot of other countries also have other initiatives–Canada, New Zealand, Australia–and also a lot of excitement and interest in getting developing country governments to be open, transparent, by putting data about what's happening in those countries onto the web because that will make each country which is more transparent becomes more trustworthy, is more credible, is easier to do business with, easier to invest in.