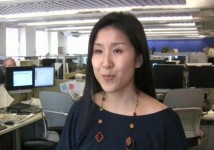 NBC Local, the network of 10 regional U.S. Web sites created around television stations, is expanding its microblogging platform called SoMyCity to the iPhone with a new app which launched this week.

The SoMyCity, which allows users to surface up comments and photos to the NBC sites, as well as Twitter and Facebook, was launched in July.

Social media interactions on the NBC Local sites have reached 300 thousand per month, we have been told.

Earlier this week we went to NBC headquarters at 30 Rock to interview Katherine Wu, VP of Operatons, Local Integrated Local Media for NBC Universal. Katherine explains the value of social media on the network and the new iPhone application.