Money is in Making Communities, Not Content, Sarah Szalavitz Says 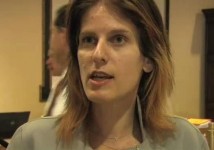 HOLLYWOOD, Calif — There’s more money to be made in creating communities for programming online than making the content itself, Sarah Szalavitz of social design agency 7 Robot told Beet.TV at the NATPE LA TV Fest.

She’s also a content creator, since she writes and produces the Web’s top green series “Zap Root,” which has earned more than 500,000 views for many of its episodes. But that’s often not enough to pay the bills, so Szalavitz built 7 Robot, which has been profitable from the get-go, to develop communities around content. “The content was selling at a rate that wouldn’t pay the rent, let alone the mortgage I was aspiring to, but the MSNs and Generates of the world were hiring us to build communities for the content,” she explained.

MSN.com and multimedia production shop Generate are among 7 Robot’s clients.

7 Robot builds participation into digital content from the development stage. That doesn’t mean “choose your own adventure,” but does refer to how to distribute, share and build an audience for a show. That’s the heavy lifting required to make a digital series successful.

While Szalavitz is an advocate for Web content, she also contends the business needs more transparency in metrics especially since some video portals still rely on auto views, meaning counting views for videos that start automatically when a Web visitor arrives at a site. “When you click to a Web site and there is something playing at the bottom of the screen that you are unaware of and made no choice to watch, I have a problem with saying that’s a video view,” she said. “Why would that count for ad dollars?”

By Daisy Whitney on August 2, 2009 @daisywhitney