What the Hell is Ogg Theora and Should We Care: Mike Hudack Explains 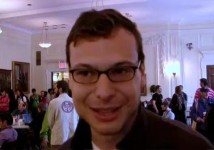 NEW YORK , NY — There is a powerful movement underway for open video standards for the Web.  The biggest implementation will be seen very soon on Wikipedia where you will watch videos in an open source video application called Ogg Theora.

The imminent release of Firefox 3.5 will come with HTML 5, which allows video to be embedded into the Web page without the need for plug-in's.

The World Wide Web Consortium (WC3), which has spearheaded the development of HTML 5, along with many in the open source movement, believe that there should be a free way to publish videos on the Web without the need to pay royalties to patent holders.

Last weekend, I attended the Open Video Conference and interviewed key thought leaders and executives from the Mozilla Foundation, Wikipedia, Kaltura, DailyMotion, Blip.tv, Adobe and others.  Oh, and we caught up with BoingBoing's Xeni Jardin too!

We will be publishing several of these videos over the next week or two.

As a primer, I thought it would be helpful to have our pal Mike Hudack, CEO and co-founder of Blip.tv, give us an overview of Ogg Theora and the importance of the open source movement.  I spoke with Mike at the conference on Saturday afternoon.

Liz Gannes published an excellent industry overview on open video on Sunday on NewTeeVee.  Stephen Shankland at CNET has an overview on the implications of Firefox 3.5 and HTML 5.

Here is a story by Michael Hickens on BNET about how HTML 5 will transform information technology  and how it could "undermine Google's business model."  Wow.

Nearly two years ago, I interviewed Philippe Le Hegaret Architect Domain Leader of the World Wide Web Consortium on many of these topics. His visions are about come to fruition.  I have published this video on this post as well. You can find it below.

Mike says that it will take several years for this open video movement to take hold, but we need to be watching.

Disclaimer:  Blip.tv is the primary video publishing platform for Beet.TV.