Online Publishers Getting Creative in the Downturn 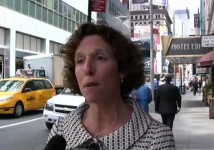 Reports out today on the downturn in online advertising for Q1 must not come as surprise to most publishers.

Seeking new form of revenue and presenting the industry is developing new forms of display advertising.  On Monday here in New York, at the ContentNext conference, I interviewed Pam Horan, president of the Online Publishers Association.

Pam Horan:  We have announced a new initiative that the OPA member companies are supporting.  Actually 35 of the members are supporting the launch of these three new add units. And it's really designed to provide a platform for marketers to deliver brand experiences right on the pages of these rich content sites. So you know you look at the New York Times, you look at Time Inc. with people.com or espn.com. Consumers are spending a lot of time with the content, so the idea is rather than focusing on getting the consumer to click off the page, the idea is delivering that experience directly on the pages of these sites. And so what we're trying to do is evolve the conversation from so much of it being tied to the direct model and focusing on click-throughs.  The idea is really looking at what brand marketers are trying to do, and that's often to drive persuasion and other types of experiences and we think this is going to be a great way to deliver a new palette for the advertising agency community to do just that.

Andy Plesser:  Okay we're gonna take a look, but explain if you can.  Can you describe what the new unit is.

Pam Horan:  So one of the units is actually a push down and in some form some of us have seen something like that. Apple Computer has done one that has appeared on the pages, for example, of the New York Times, in Conde Nast, as well as CNN, and it basically opens up as a unit that that presses or pushes down, so there's a larger space for the consumer to see a message.  We also have something called an XXL, which is a rather large size box that actually opens up and is almost a full half page of the unit.  And that's a great opportunity for a brand marketer to deliver an interactive experience.  It could be video. It could be a poll or a question. And I think there's a great opportunity for for new types of experiences to be delivered there.  The last one is actually very exciting it's called a fixed panel. And as the consumer scrolls down the page the unit stays consistent with it. That's a 336 by 700, so it's a rather you know persistent page. But, I think one of the things we heard from the advertising community is that they want to be able to make these larger statements, and so what we're doing by offering these units in many cases were reducing the number of ads per page. We're reducing the number of links on that page, so it's actually providing a larger share of voice for the marketer and ultimately less distractions. Also, it's also hopefully going to generate a new level of excitement from the creative departments at these agencies that will have a bigger palate to work from.  So we think that there's there's a lot of upside both for the agency community and ultimately for the marketer.

Andy Plesser:  And how about for the consumers — you think they'll be a little overwhelmed or what do you think?

Pam Horan:  I think that the consumer…I mean, we talk about the fact that consumers spent a lot of time with this content. They also are interested in advertising messages and the opportunity is," Are you getting the right message in front of this community and how are you engaging them?"  And I think that's one of the things we have not seen:  the level of creative we've seen on other platforms. I think the opportunity now is really for the agency community to reinvent the way they're leveraging these palates and hopefully we will see a new creative renaissance.