Woodstock at 40: Never Before Seen Santana and Creedence Performance Excerpts up on Beet.TV 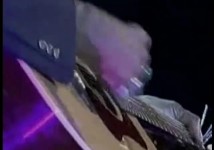 On Tuesday, Warner Brothers will release the newly expanded Woodstock film on Blu-ray and DVD to commemorate the fortieth anniversary of the festival.

Excerpts of never before seen videos of Santana and Creedence Clearwater Rival performing at Woodstock have been  provided to Beet.TV*

Creedence was not in the original film, due to a decision by John Fogerty. The film, which now runs four hours, was promoted at an event at the Hard Rock Cafe in New York on Thursday evening.

Among the performers was Richie Havens (who is in our clip). Also in the piece is director Michael Wadleigh who speaks about the recut and the opportunities for filmmakers to expand existing work, create new stories, and use outtakes.

We didn't shoot this event, but were fortunate to get several uncut clips from the NewsMarket, the online video news portal that makes original news video available to bloggers like Beet.TV.

The NewsMarket distributed this content for promotional purposes for Warner Brothers, distributor of the film.

We have edited the pieces together — with unseen performances presented in the full excerpted length, which are only about about 30 seconds.  And, yes, this material has been authorized by the copyright holders.

Last year at the Beet.TV Online Video Roundtable in Washington, NewsMarket co-founder Shoba Purushothaman was a participant.  I have republished a clip where she speaks about Web video as a powerful marketing tool.

The NewsMarket is funded by Softbank, Hearst and others.

*We don't know for sure if we are the first to publish these clips online, but we are early on.  Hope to clarify this point shortly.

Disclaimer:  My daughter Becky is a summer intern at the NewsMarket. She gave her dad the heads up on these clips!