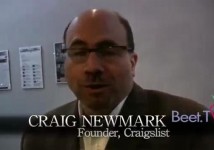 Caught up with Craig Newmark, founder of craigslist immediately after his panel organized by iWantMedia today in Manhattan.

He told me that while his company has had "an effect on newspapers," the notion that it has killed newspapers is "urban legend."

New York Times media columnist David Carr was on hand at the event.  After I spoke with Newmark, I asked David if Craig killed newspapers. He said the list shot their "back-end off" but didn't blame Newmark.

If you haven't watched one-hour the panel, check it out. It's great to watch Nick Denton and Wall Street Journal Deputy Managing Editor Allan Murray go at. Newmark is a hoot. This was shot at the NYU TV studio and streamed via Livestream.  It is running in a realtime loop here (scroll down the page to see the player.)

Congratulations to Patrick Phillips, founder of iWantMedia for putting together such a superb program and doing such an ace job at moderating.

Here's the take on our Newmark interview up on Mediabistro.

You can find Beet.TV on the Huffington Post too!

Craig Newmark:  I…You know we have an effect on newspapers; to a large extent it's an urban legend. In a democracy you just got to have a vital press with a journalist asking tough questions and then getting answers.

Andy Plesser:  What's next developments for Craig's list do you think?

Craig Newmark:  You know, for us it's mostly more of the same: more cities, more countries, maybe more languages. That's about it.

David Carr:  Well they've shot the back end off of newspapers, but if Craig wouldn't have done it, somebody else would've. I think having Craig is Colonel Mustard having committed murder against…I think that's over and done. The newspaper industry has significant audience problems that they need to address that have nothing to do with Craig or Craigslist.