ANALOG TV IS NOW OFF: Streaming Video on Mobile Phones In San Francisco, Boston, Miami is On 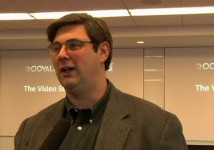 As the lights go out today on analog television broadcast as part of the long-planned transition to digital, frequencies in several markets carry television signals to mobile phones.

At the D: All Things Digital
conference in California in May, I interviewed Bill Stone,
the president of FLO TV, which is wholly owned by Qualcomm. Qualcomm, which has spent $500 million to buy frequencies used by analog broadcasters in several U.S. markets, is expanding the reach of its FLO TV network in new markets including San Francisco, Boston, Houston and Miami, adding 60 million potential customers.  A total of 15 new markets go online today.

Later this year, the company will expand to New York, Los Angeles, Washington, Chicago, and other markets and also expand its product offerings to automobile television.

Here's the take on FLO TV by Stephen Wildstrom at Business Week.

Bill Stone: We're excited we're finally going to be able to light up a national network. Unfortunately, the government delayed the transition from analog to digital. It was supposed to happen in February; to give people more time to find converter boxes, they extended it out into June, but the implication of that is, that unfortunately, we weren't able to turn up some major markets, like San Francisco, Boston, Houston, Miami. And so now, in the middle of June, we'll be able to light those markets up and really have a true national footprint in the major markets across the country.

People increasingly want to live life on their terms, wherever they are. And so no longer is it I've got to be home at 8pm to watch a program, I want to watch something when it's happening. So if a plane crashes in the Hudson River, or it's the Laker v. Nuggets game, I want to watch it when it's happening. So at FLO TV, we've built a national network that can deliver broadcast television directly to subscribers. Here, so we have ESPN, Fox, NBC, CBS, MTV, Viacom, so we've really we've got a broad array of channels for customers to watch.

For us, we have it on nine devices right now from AT&T and Verizon, and so you can get it through your local Verizon or AT&T retail location. But also we'll be launching later this year a number of other applications. So it'll be in the back of automobiles with rear seat entertainment. So people already today are very accusomtomed to watching DVD's in the back of their cars, there's no reason why you can't watch television. So we're excited about that market opportunity. There's more rear seat entertainment units in the United States than there are iPhones, so we think that's a tremendous opportunity to go directly to the consumer through the FLO TV brand. We'll also be launching it through accessories and we'll also be launching it through personal television devices and a wide array of things other than just cell phones to take advantage of a really cool service.

The capacity of the network is up to around twenty channels, but I think that the key as we go forward in time is how do I integrate more On Demand offerings with the live offerings that we already have. I think customers want both. I want to watch things sometimes On Demand, I want to watch things live when they're happening. So as we go forward with the network, it'll be really a good question of how we bring those elements together with the concept of time shifting–when I want to watch it whenever it's happening versus the concept of place shifting, wherever I am, I want to enjoy the service. And really, bringing those two things together is the key for success with mobile TV.