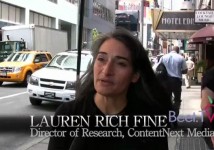 Great piece up by Daisy Whitney writing for the Hollywood Reporter on how Google TV is becoming part of the television ad marketplace.

Marketers can buy  Google TV for buying television time or they can insert their ads on YouTube, a relatively new development in the monetization of YouTube.

Early this month, we spoke with YouTube spokesperson Chris Dale about how Google TV works on YouTube, among other advertising solutions at the giant video site.

We have reposted the video today.