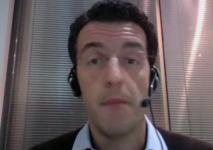 Adobe announced early today that Flash 10, the newest version of its ubiquitous Flash web plug-in which drives a vast majority of video consumption, has reached an installed base of 55 percent of global users of Flash.

Why is Flash 10 better?  Last summer at Stanford, I interviewed Adobe's Jim Guerard, the executive in charge of the company's dynamic media division about a number of developments at Adobe.  For an explanation of Flash 10, which was in beta at the time, his comments come at 1:35 into the clip.

For more about the significance of Flash 10, read Robin Wauters in TechCrunch  and Anthony Ha at Venture Beat.

Adobe on the Hunt

Update from NewTeeVee on What Adobe Should Buy

Liz Gannes at NewTeeVee has some suggestions.