Peter Kafka: Media Layoffs Will Continue in a Grim 2009 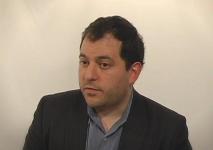 Peter Kafka, who debuted his daily blog MediaMemo on AllThingsD in October, writes today that the ad recession will last at least another year — making it the longest ad recession since The Depression. Which is, well, depressing.

At our marathon filming day at the Mogoulus studio in Soho earlier this month, Peter described the state of digital media to Andy. “If you’re only making a digital product it’s very hard to make a
living, and if you’re used to making a lot of money selling it in
analog form you’re making a lot less,” he says in the interview.

He also discusses how venture capital fundraising is faring, and has a (very slightly) cheerier prognosis on that front.

Kafka’s blog has risen quickly up the Techmeme Leaderboard and is currently number 18.