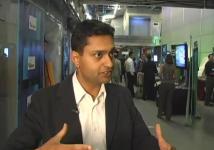 The search solution Kosmix has raised $20 million in a funding round led by TimeWarner, the company announced today–an impressive feat in today’s economic climate. Andy interviewed Kosmix Co-founder Anand Rajaraman in New York earlier this year, and I republished the interview here.

It seems impossible for any search start-up to raise that kind of money when there’s already a Google, but Kosmix isn’t a direct competitor with the search giant. Instead of producing results for a highly specific search, Kosmix organizes videos (powered by Truveo), audio, and articles on a magazine-style page for users with a more general topic in mind.

Kosmix also introduced the beta version of its site today. Here’s the take on this development by Venture Beat’s Anthony Ha. Here’s a story from the BBC.