Google’s Vint Cerf, ‘Father of the Internet’: “Online Video Will Be Distributed in Download Mode” 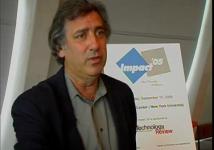 Vint Cerf, a computer scientist who is most often called the "father of the Internet," says that the popularity and demand for online video will mean that the distribution will eventually be done "in download mode," not streaming, which is pervasive today.

Cerf is Vice President and Chief Internet Evangelist for Google.  I interviewed him today at the Personal Democracy Forum in New York where he was a panelist.

He envisions another solution to video distribution in the form of broadcasting files simultaneously to consumers.

While an executive at MCI, Vint was a law client and friend of my dear brother Ron who passed nearly four years ago.  Ron was an influential Internet policy attorney in Washington, D.C.  We remembered him fondly yesterday.   He would have enjoyed seeing Vint on my show, for sure.