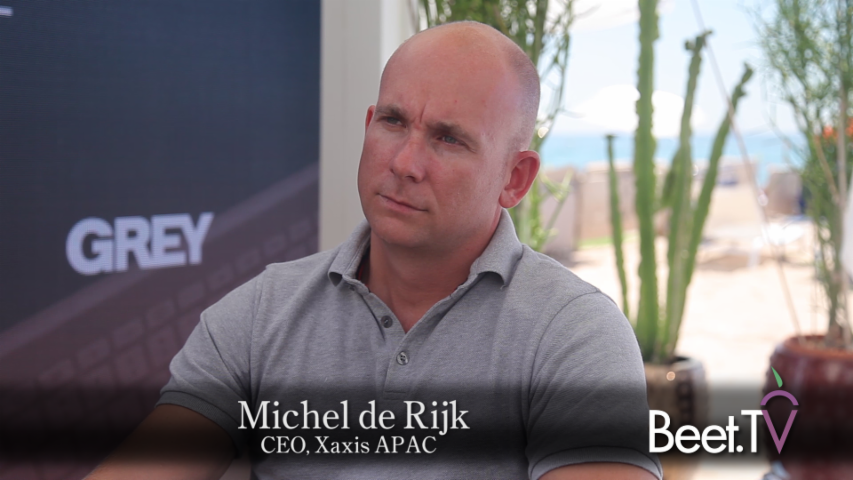 CANNES — TV ads bought using programmatic technology will grow to represent just 1% of the overall US TV ad spend in 2016, according to a recent eMarketer forecast.

But, if you thought that was small, just look at the Asia-Pacific region, where things are still in their “infancy”, according to the Group M programmatic exec trying to boost the tech in the area.

There’s some initiatives mainly in Australia, in China and a few small companies just launched to try to cover the South-East Asia region.

“The most developed market is Australia, the most proactive, but still there it’s in its infancy right now.”

Almost half of APAC marketers have bought programmatically, according to recent Forrester research for MediaMath. But that is much smaller when it comes to TV specifically.

While TiVo in the States expects the US industry to hit 5% to 10% programmatic TV spend in the next 12 months, AsiaMX, a Singapore-based premium cross-media monetisation service provider, only launched Asia’s first programmatic TV advertising sell-side exchange in March.

“When we launched Xaxis in Asia four years ago, we had to approach advertisers and agencies and explain what programmatic was,” says de Rijk. “Now the big markets have adopted programmatic at a pretty decent scale.

There’s a lot of work to do. Programmatic is seen as bringing more efficiency to the media buying process. But I think programmatic brings a lot more opportunities to the table – specific audience messaging, overlaying of data opportunities. A lot of Asian markets still need to adopt that in a more proactive way.”

By Robert Andrews on July 17, 2016 @robertandrews
Tweets by Beet_TV