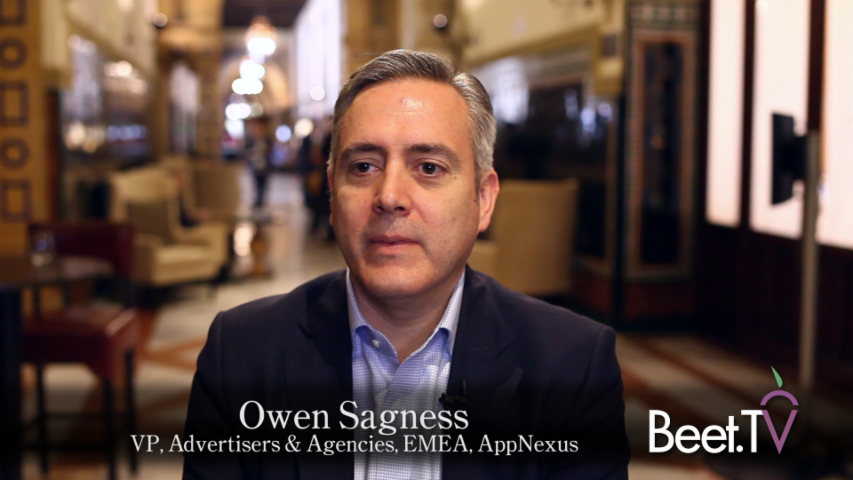 SEVILLE — As ad-tech platforms continue to rise up, the lingering question is: Will newly-empowered brands now decide to take on many of the functions they previously outsourced to ad agencies?

Whilst that appears to be happening sporadically, it won’t happen so fast in Europe, says one ad-tech exec with a read on the trend.

“As we see marketers bringing more media buying in-house in the US, we’re still going to see that in the big markets across EMEA – but generally not to the same extent that we see across that Atlantic,” says AppNexus EMEA advertisers and agencies VP Owen Sagness, in this video interview with Beet.TV

“People need to partner more with their agencies. Their agencies have the scale. In many cases, they’ve got the trade desks already in place. They’ve got volume discounts. There’s a lot of benefits they can bring to the marketer.”

Sagness says European markets lack the kind of scale the single US market boasts. For AppNexus, he sees an opportunity in video advertising. After a troubled start, the company last year rebooted its video ad offering.

“With YouTube having closed off and become more of a walled garden, Facebook has backed away from LiveRail, there’s a real opportunity in the market for someone to grab hold of the video segment,” he claims.

“We’ve launched an open marketplace that has a lot of out-stream video, allowing us to work with new publishers, as well as traditional in-stream video.”