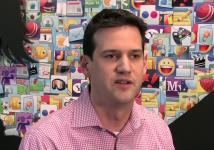 BERLIN — Companion TV app Zeebox is slated to introduce a new update in the coming weeks that will better incorporate interactivity and ads into the service, says Michael Slater with the iOS team at Zeebox, during an interview at The Europas tech awards event in Berlin. Those tweaks will include a new design, a synchronized ad platform and additional social and interactive features.

Zeebox made the changes after tests with users who shared feedback on their likes and dislikes with the service, Slater explains in this video interview. The "Zeetag" stream that appears alongside the app has been redesigned to better showcase how the companion content synchs with what's on air, he says. In addition, Zeebox will introduce a synchronized ad platform. "When an ad break starts, ads come in and advertisers can also have a bit of ads in the stream, like maybe a game alongside the TV ad," he says. The app also includes social components such as polls and comments. Most recently, Zeebox provided Golden Globes synched content.

Look for more updates in the coming weeks, Slater tells us.

By Daisy Whitney on January 29, 2013 @daisywhitney