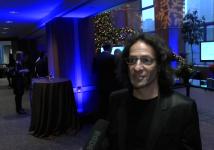 Zeebox, the second screen app,  which is being widely deployed in the U.S. by NBC Universal, FOX and HBO, will launch a “synched ad” platform in January, allowing marketers the ability to serve ads into the Zeebox app which are associated, in real-time, with the commercials on the television, says  Anthony Rose, co-founder and CTO of the London-based company.

The make this happen, Zeebox has created a sort of “Google search engine equivalent but for live television,” he explains in this interview with Beet.TV

Rose is the former Head of Media Technology of the BBC where he spearheaded the development of the iPlayer.  Wired magazine declared him “The man who saved the BBC.”

We spoke with him earlier this week in New York at the TV of Tomorrow conference.

This video is one in a series of leadership interviews with digital innovators presented by FreeWheel.