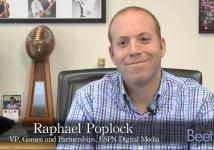 ESPN is expanding its roster of advertisers for its WatchESPN product on the XBox Live with the addition of Best Buy in the coming weeks, joining existing advertisers such as Nissan and EA Sports in the XBox app, says Raphael Poplock, VP Games and Partnerships at ESPN.

He spoke to Beet.TV about the growth in ad interest in the ESPN on XBox product, as well as how the sports network is aligning with the gaming console in this video interview.

ESPN is selling ads in WatchESPN, its authenticated TV Everywhere product that's available on the Xbox, through its cross-platform sales team, Poplock tells us. "That's how we sell and with that in some ad buys, advertisers get commercial inventory in WatchESPN, so we can extend the impressions through the XBox," he explains.

The ads allow for interactivity as well. For instance, Nissan is currently running a sponsorship that lets users vote on who should win the Heisman Trophy in the XBox app, Poplock says in this interview. WatchESPN has run sponsorships from EA Sports and also has Best Buy slated for this year as well.

"Advertisers are seeing the value of connecting gamers and sports fans on this service," he says. He adds that marketers are also requesting that their video ads be inserted in the live programming windows on digital platforms. In the coming months, the network will also roll out an ad solution for its online clips.

As ESPN expands to new platforms, the focus remains to do so in a way that's true to distribution partners. "We look at platforms that are gaining and in the case of live programming, we will do it in an authenticated fashion and extend the value we give our fans to the digital platform," he says.

We also spoke to Poplock about the rollout of ESPN's TV Everywhere product with the launch of its XBox Live app.

This video is one in a series of leadership interviews with digital innovators presented by FreeWheel.

By Daisy Whitney on December 7, 2012 @daisywhitney