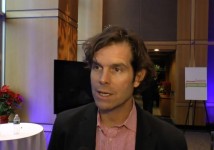 While many broadcasters are experimenting with the use of the “second screen,” meaning mobile devices which provide accompanying content to TV shows, Turner Sports might have found something of killer app in the emerging medium with predictive gaming around sports programming.

In this video interview wiht Beet.TV, Peter Scott, VP of Emerging Media for Turner Sports, says that the network’s use of predictive gaming apps round the NBA and other programming could be the “future of sports television” by involving fans and providing an entirely new advertising opportunity for big brands including State Farm Insurance.

We spoke with him yesterday at TV of Tomorrow conference where he was a speaker.