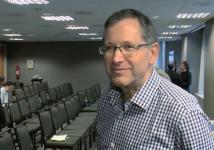 Amsterdam-based Ex Machina, an interactive technology provider to TV programmers, has announced a  licensing deail with London-based Zeebox, the second-screen app developer whose product is being used  by network programmers in the U.K., U.S. and Austrailia.

We spoke with Larry Taymor, head of U.S. operations about the company and its deal with Zeebox.   Separately, we interviewed Zeebox CTO and co-founder Anthony Rose, about the implementation of Zeebox for live polling and other interactive elements.