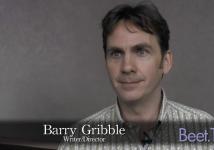 As the use of "second screen" devices during television viewing grows, so has the desire of consumers for second screen content that adds to their viewing experience.

Last month, Samsung sponsored a competition to foster creativity in the multi-screen programming arena.  We spoke with Barry Gribble, writer and director of The Conspiracist, one of the competition’s finalists, who believes that "second screen content is inevitable for narratives."

In this video interview, Gribble explains the concept behind The Conspiracist, a spy-action thriller focused on a conspiracy theorist, his hacker partner, and an alien that comes to them for help finding her father, who was taken by the governemnt.

What makes the series unique is that, in addition to the main narrative on screen, their is an entirely separate second-screen experience that helps viewers engage with the content on a different level.  Gribble says, "What I really like about it is it opened up a lot of possibilities for what to do with the second screen because genre-type things in general are so information dense, and they have an audience that’s so information hungry that you can really dig into giving them other information about the stories that they’re talking about."

He says, It’s not a question of are we now going to divide [viewers] attention from the main screen.  Their attention’s already divided.  The question now is, are we going to be able to utilize that division to add to the narrative, rather than right now where it just detracts from it."