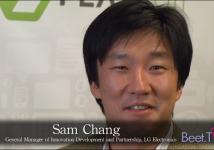 Less than 10% of the time people spend watching connected TVs is with over-the-top and virtual services, while more than 90% is still with traditional programming, and that ratio won't likely change soon, says Ashwin Navin, CEO and Co-Founder of social TV software firm Flingo, in this interview with Beet.TV

"People are watching more TV than they ever have. You could say today is the golden age of TV," he says in an interview with Beet.TV.

Flingo is a software embedded in smart TVs that enables social communication — essentially, social apps for TV. "It complements the traditional experience. We built software to rapidly identify the shows people are watching," he says. Flingo's technology can detect what viewers watch and then communicate that information to a TV, tablet, computer or smart phone to make it easier for consumers to interact socially with others about the show. Mark Cuban is one of the investors in Flingo.

The goal of the service, Navin tells Beet.TV, is to make traditional TV and the ads in it more engaging. "We believe that we can transform the traditional ad business on TV into something that looks more like the direct ad business so advertisers can close the loop, and we think that can have a massive impact." Flingo's TV partners include Fox, A&E, Showtime and others.

By Daisy Whitney on November 20, 2012 @daisywhitney