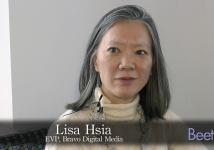 Bravo has launched its first Zeebox integration with its series  Life After Top Chef, says Lisa Hsia, EVP of Digital Media at Bravo, a NBC Universal unit, in this interview with Beet.TV

In this interview, Hsia explains and demonstrates how the Zeebox app works with the television experience.

NBC's parent Comcast recently made an investment and forged a strategic partnership with London-based Zeebox.  Earlier this week, we reported how Zeebox was integrated into NBCNews.com for Election Night coverage.