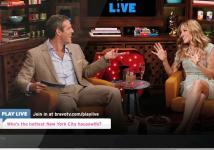 Bravo has a new interactive platform called "Play Live."  Unlike some programmers who put interactivity around shows on a mobile device, the "Play Live" appears as an interactive banner on the TV show as it is broadcast.   Viewers interact to offers by "voting" on various devices.

For an explanation of Play Live, we spoke interviewed Lisa Hsia, EVP for digital at Bravo.

The first implementation will tonight on Watch What Happens Live.

In addition to Play Live, Hsia talks about the use of the "second screen" being used by Bravo.

Here is an earlier story on plans for Play Live by Peter Kafka at AllThingsD.