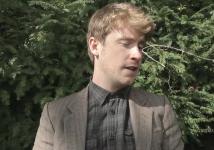 As growing numbers of television viewers are turning to their second screen devices (i.e. laptops, smartphones and tablets) while watching their favorite TV programs, more and more content designed with the second screen in mind is coming to fruition.

We spoke with Greg Ash, writer, director and star of Super Chill, a multi-screen web series and finalist in the recent Samsung Second Screen Story Contest, who gave us his take on the second screen’s impact on storytelling.

In the interview, Ash told us about Super Chill, which he describes as "a playful comedy set in Portland."  He says, "it’s the story of two misfits—a British filmmaker, played by myself, and an American actor, played by Vin Shambry, and these two misfits meet one day on a park bench and set out on a journey, perhaps a little bit naively, of wanting to pursue their dreams in Hollywood."

Super Chill takes a creative approach to the second screen, setting up security cameras around Portland that let viewers get a glimpse into the lives of secondary characters on their devices while the main characters and narrative appear on the primary screen.  Ash says, "We felt that it was a great way of presenting the world that we were creating in Super Chill, giving glimpses of other locations, other characters, but that it was done in a manner that didn’t take away from the primary content."

Ash believes that this second screen content gives the series a presence that is more like literature than the traditional film or television show.  "I like the way in literature that you will get glimpses of what different characters are doing.  In works like Dickens you get this kind of broad tapestry of a city.  We found that the security camera footage was perhaps a modern version of this, giving the viewer that chance to sort of be omniscient and to see what other things were going on within this world of Super Chill."