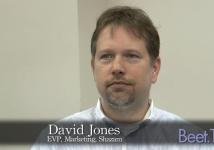 The World Series is Shazam-enabled, allowing television viewers in the United States to use their mobile and tablet devices to synch up to their televisions for up-to-the minute news, social buzz, stats and other information about the game, says David Jones, EVP for Marketing for the London-based company.

Shazam announced its deal with Major League Baseball earlier this month.  Shazam had its biggest television deal this summer when it enabled all of NBC Sports coverage or the London 2012 Olympics.

The Shazam app "listens" to the audio of a broadcast and immediately synchs to the programming, providing companion information as well as advertising.  Shazam indexes some 160 U.S. television, cable and satellite channels.

Shazam and the U.S. Elections

While it doesn't have arrangements in place with U.S. broadcast or cable news channels for election coverage, Shazam will allow viewers to synch up with all new channels, providing relevant information.

Originally a service to identify and purchase music, the company has made a big move with "second screen" consumption around television.  It annouced its capability to synch with 160 U.S. content providers last month.