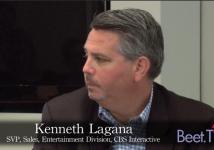 CHICAGO — Expect more two- and four-screen experiences across CBS’ special events, sports and regular programming this quarter and into 2013.

CBS has aired exclusive companion programming on mobile screens synched up to some of its fall premieres, and is also planning more social and second-screen efforts for special events, such as the Victoria’s Secret fashion show in early December.

In addition, last year’s Grammys fared well in social spheres, so the network plans even more social media and second-screen tie-ins to the upcoming event, Lagana explains. In addition, CBS will continue to create digital extensions for shows, as it does with webcasts concerts from the bands playing on Late Show with David Letterman, he says.

“We are almost looking at each TV show as live event,” he explains, adding that social chatter can drive live viewing. Despite these efforts, the network is still trying to figure out the best pricing strategy for digital ads, he says. In some cases, money is moving from TV to digital, and in other cases the pie is growing. He expects deeper discussions about mobile at the next upfront. “The business has to be set up to take advantage of all of these things — not just on publisher side but on the agency side too,” he says.