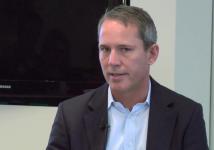 CHICAGO — AOL’s syndicated video business is growing quickly, at close to 70% to 80% per year, says Brad Elders, Senior VP East Coast Sales at AOL. Beet.TV contributor Ashley Swartz spoke to Elders at the Beet.TV Advertising Leadership Summit in Starcom’s Chicago offices for a deep dive into AOL’s approach to video, as well as whether online video can compete with TV.

Across its network, AOL On is delivering 62 million unique viewers watching 1 billion videos each month, Elders says. The challenge though is many of those views are for short-form video, so comparing the scale against TV where the ad load is bigger can be complicated.

Even so, AOL is studying the effectiveness of ad environments in long-form and short-form programming especially as it moves to use online GRPs. “TV continues to see a lion’s share of the budget and it gives advertisers the chance to reach scale quickly…we need to make it easy for marketers to spend a lot of money, so the GRP is at least a baseline,” he says in this video interview.

Elders came to AOL via the 5min.com acquisition, and he shares his views on the value of the syndicated model for video. “The syndicated model gives us the scale to compete effectively for a bigger share of the budget,” he says. Other issues in online video include how to price packages of online video, discoverability of video, and scarcity of inventory, he says to Swartz.

Disclosure: Beet.TV has a syndication arragnement with AOL On.