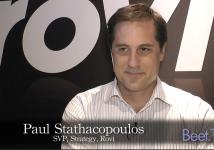 We caught up with Rovi for an update on how service providers are using Rovi's technology with IP-delivery.

DivX Plus Streaming is an adaptive streaming solution that is widely deployed, explains Stathacopolous in this video interview. He tells us DivX is used on more than 750 million devices worldwide. Rovi also focuses on powering online stores and streaming for a range of providers. "We are seeing a big confluence as IP collides with the service provider experience. We see the definition of a service provider expanding to include these type of storefronts," he says.

Rovi's offering also includes managing rights negotiatons and management for digital storefronts. That can include crossing borders, such as bringing North American content to a European storefront, for instance, he explains.

For more insight on digital storefronts as well as the next generation of adaptive streaming and what it means for media companies, check out this interview from the IBC Show.

By Daisy Whitney on September 12, 2012 @daisywhitney