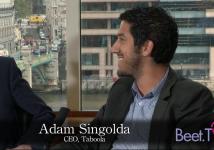 LONDON – Online video viewers are increasingly “stumbling across” videos rather than searching them out, a habit that puts a greater premium for tech companies on surfacing videos for those consumers, says Adam Singolda, CEO of video discovery and distribution service Taboola, during a Beet.TV panel at the Beet.TV Video News Summit at the Financial Times this summer.

Singolda talked about the notion of content being king and said that the saying only applies if there is still a kingdom for video. Taboola aims to create “kingdoms” by crafting hubs of videos for different publishers, he explains in this video session. “If you read an article on WSJ.com, we might show you a video from Yahoo, so that builds a system where everything is connected,” he says. That strategy serves to link publishers together in a way that makes sense for the user, he adds.

By Daisy Whitney on September 4, 2012 @daisywhitney