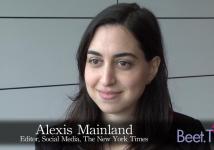 After testing Google Hangouts for the past six months on a number of interactive video projects, The New York Times has embraced Hangouts as a primary social video platform says Lexi Mainland, Social Media Editor of The New York Times, in this interview with Beet.TV

The Times has done a number of Hangouts, most recently with Olympics athletes in the weeks prior to the London 2012 Olympics.

The paper has plans to use Hangouts around the upcoming political conventions. Those hangouts will feature op-ed columnists Gail Collins and Frank Bruni coupled with citizens of various political persuasions.

In this interview, Mainland explains the value of the Hangouts from a production, economic and social media perspective.

Although participants in the video chats need to be on Google+, the videos created by the Hangout are streamed on YouTube and embeddable onto the paper’s pages, she notes.

Google Hangouts and The HuffPost LIve

The just launched HuffPost Live streaming network uses Google Hangouts as the platform for the show’s guests who are participating from various locations outside the studio.