The newly launched HuffPost Live is streaming 12 hours of programming daily, but it may be that most of the consumption of the content is via edited clips created from the shows. 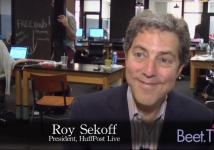 The newly launched HuffPost Live is streaming 12 hours of programming daily, but it may be that most of the consumption of the content is via edited clips created from the shows. The clips are seen on the pages of the Huffington Post and are widely syndicated.

In the first two two days of the new Webcast, some 220 videos were created, a Huffington Post spokeswoman told us.

Late last week, we sat down with HuffPost Live chief Roy Sekoff for an overview of the shows’ unique community engagement, studio talent, the use of Google Hangouts, advertising on the site and the production of video on demand programming.

Sekoff was the founding editor of the Huffington Post.