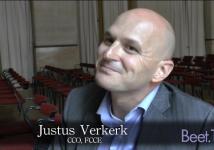 PARIS – Dutch filmmaker Paul Verhoeven's 'Tricked,' a user generated movie born out of a TV show from the Amsterdam-based distribution and consultancy company, FCCE, is a model movie for future films spanning other languages and themes says its producer, Justus Verkerk in this video interview with Beet.TV

Both versions were then published online for the community and Verhoeven to review so, creating a 50 minute film in eight phases, Verkerk adds.

Launched at Cannes earlier this year, the film is a multiplatform effort, produced in-house by FCCE.

We spoke with Verkerk at the UbiQ conference last month.