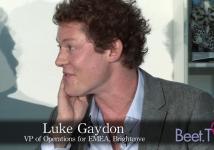 LONDON — Facebook has proven to be an effective mechanism for discovering video especially as the social service has become a VOD-like destination, says Luke Gaydon, VP Operations, EMEA at Brightcove during the recent Beet.TV Global Video Summit at the BBC Worldwide.

The BBC in particular has pursued interesting Facebook strategies, such as offering full-length episodes of “Dr. Who” to be puchased via Facebook credits, he says in this session from the summit. “That’s a powerful mechanism for increasing consumption,” he says.

“Top Gear” is another example of episodic content that performs well on the social sharing site, he adds. Brightcove offers its player on Facebook in the standard VOD Cloud player. For more insight from Gaydon on working with Facebook, check out this video clip.

Gaydon was a panelist at last month’s Beet.TV Global Video Summit at the BBC Worldwide.