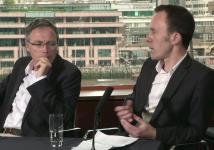 LONDON – The Financial Times, which has produces primarily talking heads videos from its studios in London, New York and Hong Kong, is gaining attention for its longer-form, feature stories says Josh de la Mare, Global Editor of Financial Times Video, in this segment from our recent video journalism summt at the FT’s headquarters.

The Wall Street Journal is also expanding its longer-form video productions, a development we reported ealier this yer.