‘AOL On’ To Develop Cross Platform and Mobile Support 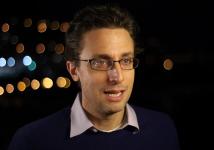 AOL On will evolve to develop more mobile and cross platform support in the future, says its Head of Business Development, Frank Besteiro in this video interview with Beet.TV

The online video network, which launched on April 24th, currently offers 14 channels of content including food, entertainment, business and technology.

While syndication plays a big role in its slate of programming, the organization also produces original content, attracting 861 million video streams per month.

Today, the platform has an audience of 57 million in the U.S. alone, consuming content across Sony, Samsung, Yahoo! Connected TVs devices, Roku, Google TV and Boxee.

These services will be further extended to include more cross platform and mobile support, while also partnering with Xbox Live in the future says Besteiro.

In this interview he explains how the video network is developing its multicultural, health and technology audiences alongside its unique female demographics.

Beet.TV caught up with him at this year’s VideoNuze conference.