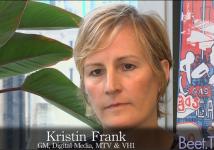 The campaign centers around its hit show, 'Teen Wolf,' which has a year inbetween seasons. In the hopes of breaking down the regular confines of linear television, MTV's 'Storytelling Without Borders,' uses the social media space via Facebook, to engage the fan base via game-like postings and content.

This has translated into a 20 percent increase in year-over-year ratings, adds Frank.

In this interview, she explains how the company's second screen products are curating the social conversations and why the strategy is allowing traditional TV shows to occupy the social media space more effectively.