Financial Times Video Chief: Video Is a “Shop Stall” For The Global Paper 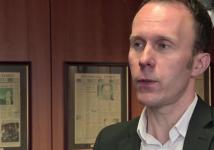 LONDON – The Financial Times video offering is a sort of a “shop stall” for audiences who are less savy about the paper and a way to bring them into the fold, says Global Video Editor, Josh de la Mare, in this interview with Beet.TV

Speaking to Beet.TV’s Executive Producer, Andy Plesser, de la Mare says its a way of showing the human faces of the stories it covers.

Video is part of the site’s larger multimedia infrastructure, featuring interactive grahics, audio and picture slideshows and unlike its print couterpart, viewers do not have to subscribe to view the content.

In this interview he discusses, the role of video for niche publications and the demographics of the organization’s online audiences.

This video was shot last week at the Financial Times, which hosted a summit on video journalism, which de la Mare participated in.