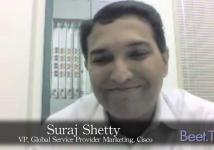 Cisco‘s, latest report on internet network growth and trends, the Visual Networking Index Forecast (VNI) predicts that the Internet will generate 1.3 zettabytes of traffic in 2016.

That is equivalent to transferring all the movies ever made, over the net in less than three minutes says VP for Global Service Provider Marketing, Suraj Shetty in this interview with Beet TV

According to the report, an increase in the number of devices — each person is expected to have almost 2.5 connections, more internet users, faster broadband speeds, more Wi-Fi connections and more video traveling the across the internet every second, will contribute to this significant level of growth.

Geographic trends show the Asia Pacific region to generate the most IP traffic, beating North America’s output per month, while China and the United States will be the highest traffic generating countries by 2016, as per the VNI’s forecast.

From San Jose, Shetty explains the trends to Beet TV. Here is a press release summary of the story.