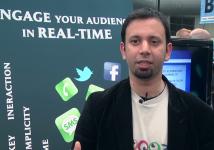 Snooozy, the startup company specializing in audience engagement, launched new software to help television stations  interact in real time with its audiences. It is a format similar to American Idol and the X Factor, which can be deployed across local and national stations, says Belal Hummadi, Co-Founder and CEO, in this interview with Beet TV

Speaking to us at this year's TechCrunch Disrupt, Hummadi says the new product works by aggregating audience responses from phone calls, texts and social media, then analyzing the data to deliver the results in real time.

NBC Bay Area currently uses the Snooozy software as part of its newscast.