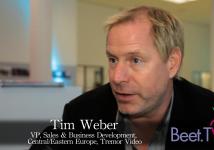 The demand for premium online video content is much higher than the supply, said AOL SVP for Video Ran Harnevo during a conversation at the BRX Video Summit this month on ad exchanges, premium inventory and the online video ad marketplace needs and wants.

“There is way less premium inventory than marketers think there is,” Hanevo says, adding that premium inventory also needs to be better defined and better priced. He says AOL’s been at about 90% percent sold out for the last six months, underscoring the supply-demand concerns.

NBC News’ digital properties are also selling at high levels, operating anywhere from 92% to 95% sold out on an ongoing basis, says David Derobbio, Eastern Sales Director for NBC News Digital in this session moderated by Brightroll CEO Tod Sacerdoti. Derobbio explains that NBC relies on time-based ad-serving and it can dial up or dial down the frequency with which it serves video ads if it needs to create more inventory.

For NBC News, the digital properties are designed to complement the TV news product, and as such NBC hasn’t made a big push to bolster its video content or accompanying inventory with syndicated videos from other publishers. “We want that Internet sweet spot where we have a broadcast viewer being driven to digital to take an action, to comment, to watch a video,” he explains. “We want someone watching TV who is also hammering away on their iPad.”

Within two to three years, Harnevo predicts that only four to five of the biggest premium publishers will sell their inventory directly. The rest will rely on ad exchanges and ad networks, he says in this video from the session. “The rest of the publishers will have to cooperate with exchanges to create efficiency for the buying side.”

This was a session recorded at the BRX Video Summit in New York.

Disclaimer: This video was produced and published as part of a custom publishing arrangement with Brightroll.