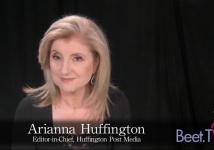 The Huffington Post, which has galvanized a massive community of millions of content creators who engage via comments, “likes,” tweets and thousands of guest blog posts, will soon participate in an ambitious linear video network, says Arianna Huffington, editor-in-chief of the Huffington Post Media in this interview with Beet.TV

While produced in sophisticated studios in New York and Los Angeles with hosts and dedicated talent, a substantial part of the HuffPost Streaming Network will be integrating live, one-on-one and group dialogues and debates from the community, says Huffington.

Lead stories will be open to participants joining the conversations via webcams, smart phones and tablets using Skype, Google+ Hangouts and other means.

At a news Manhattan press conference on Thursday, the company showed a demonstration of how multiple conversations are moderated by a host then coupled on a screen.

The demo also showed a high degree of interactivity within the show screen – allowing viewers to click on social sharing tools and dynamic links to related content.

Huffington says the show will launch with 12 hours of daily programming this summer, eventually going to 24 hours.   Surely creating compelling programming on this scale is not a small task.   if Huffington can galvanize participation around video as she has around text, this could be big.

Coming later today will be our interview with HuffPost co-founder and video chief Roy Sekoff.  For more on the launch, read this piece by David Kaplan of TVExchanger

Disclosure:  Beet.TV has a video syndication arrangement with AOL, the parent of Huffington Post Media.