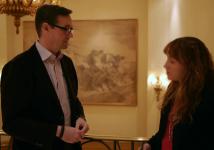 By the end of 2012, more than half of marketers will likely be experimenting with digital video, up from just  20% in 2011, which will bring a shift in the creative as well.

That's the prediction from  Forrester's David Cooperstein, VP and Research Director in an interview with Beet.TV conducted at the ANA conference in NY.

Forrester Research and the ANA just released a joint study on digital video advertising and TV ad effectiveness concluding that marketers are much more bullish both on TV ads and new forms of digital video than they were two years ago, he said. That's a promising finding, suggesting that the budget pullbacks from the recession are in the rearview mirror and that marketers are eager to test and try new ad formats.

Specifically the study found that about 70% of marketers plan to up their spending on Internet advertising this year, with mobile video the top option they'll likely test as an alternative to 30-second spots. Also, nearly half of marketers are planning to test advanced TV ad placements such as connected TVs in the coming year.

They're willing to test over-the-top, targeted TV ads, targeted video ads and other formats. "Experimentation is going to be pretty rampant over the next two years," Cooperstein said.

More on television and marketing in the is report by David Kaplan on TVexchange.

By Daisy Whitney on February 17, 2012 @daisywhitney