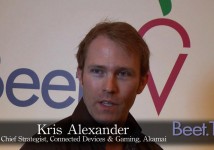 The UltraViolet platorm is designed to help protect movies and TV programming against digital piracy while allowing users to play DVD content via the cloud across various devices.

More than 750,000 consumers have signed up for the UltraViolet program for access to digital versions of content they've bought on DVD.  But the format has yet to take off in a major way, so support from companies such as Akamai may help.

"This is an important transitional step for consumers," Alexander said. He added that Akamai has added enhancements to security and content distribution over its network, which is vital as more video moves to the cloud. Akamai is also working on solutions to help port content to various smart TV platforms.

Alexander added that Akamai is preparing to deliver Olympic programming across various devices this summer from London.

By Daisy Whitney on January 19, 2012 @daisywhitney