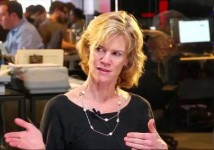 The New York Times and the Wall Street Journal are becoming increasingly video-centric as visitors become more familiar with watching clips  — and as editors provide compelling content, according to the top video editors at both publications.

This video is an except from a Beet.TV Leadership Summit on video news discovery.  You can find the session here. The event was produced at the Manhattan studios of Livestream and sponsored by Taboola.

Huge Scoop for The New York Times with Sandusky Video

Yesterday, the Times had a huge video scoop with its exclusive interview with disgraced Penn State coach Jerry Sandusky. Today, the paper expands its sports video coverage with "Punched Out" – a two-part documentary about violence in hockey which accompanies a feature story.

In an e-mail statement to Beet.TV, the Times' Ann Derry writes:

"The Jerry Sandusky interview, and our "Punched Out" hockey series, which starts rolling out today, indicate how much video has become an integral part of the Times news report. In both cases, the sports desk understood how video interviews and story telling would enhance and complement the stories and worked closely with the video department to simultaneously report them for video and print/text."