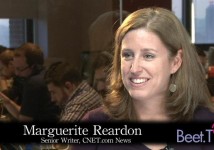 The collapse of AT&T's planned acquisition of T-Mobile will be beneficial to consumers looking for low-cost alternatives, says Maggie Reardon, telecom reporter for CNET News.com in this video segment.

This video was recorded last week when most indications were the deal would collapse.

The Problems with Android

Also in this segment, Reardon talks about some of problems with software updates for Android and a lack of stability with the operating system.

She was interviewed by the NPD Group's Ross Rubin during last week's two-hour Beet.TV webcast produced in the Manhattan offices of Livestream.