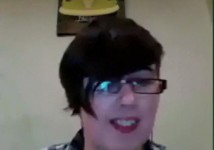 NEW YORK/BELFAST (via Skype Video) -  For many in the news business, Mediagazer has become an essential destination for important stories about the media business and journalism.

The 18-month-old spin-off of uber tech news aggregator Techmeme, has just named a new editor in Lyra McKee, 21, who lives in Belfast and works from her home and from sometime from the Sinammon Coffee Shop on Botanic Avenue where we connected yesterday via Skype Video.

McKee replaces Mediagazer's founding editor Megan McCarthy who is now an editor at the New York Observer. Joining McKee will be two other editors in different time zones. News of their appointments is expected later today.

A journalist since the age of 15, she speaks about the importance of curators in discovering and organizing news. And she says how delighted she is to be working with Techmeme founder Gabe Rivera.

Like Techmeme, Mediagazer is organized by human decision and by an algorithm.

Update:  Here is Gabe's post about the three Mediagazer hires.